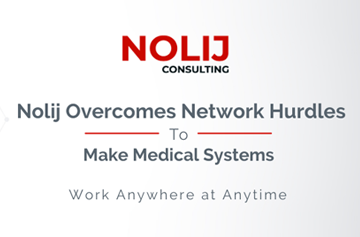 After completion of a successful project for the Department of Defense, the Nolij contracting officer remarked, “I cannot believe you solved this problem. This is huge!”  What problem did Nolij solve? Nolij had successfully ensured that data moved consistently across an array of gear, equipment and multidomain networks, such as mobile phones and satellites, in different warzone situations. This would allow the US military to provide reliable medical service across the continuum of care to soldiers as they move from the field, to Humvee, helicopter and onto command post hospitals in battlefield situations.

How did Nolij resolve the glitches in DOD’s communication networks? First, Nolij found that the military’s applications and systems were not being rigorously and thoroughly tested with the actual communication equipment used on the field during the development life cycle. For software to be reliable, it requires comprehensive testing in a “real-life” simulated operational testing environment that takes into consideration all possible scenarios and system constraints prior to deployment. This oversight during testing led to the health systems failing when deployed due to the operational environment never being introduced until it was released; thereby, causing a multitude of problems during software deployment such as tactical system failures.

Second, Nolij created a “real life” simulated operation testing environment by leveraging the Joint Network Emulator (JNE), a proprietary communications
simulation and network emulator jointly developed by DoD and EXata, that lets you evaluate on-the-move communication networks quickly and realistically. Our engineers worked with the armed services to emulate a soldier’s treatment in a warzone in different battlefield situations. Our team of system and test engineers then began to configure the JNE emulation package with all the environmental and system constraints we had discovered. After configuring JNE we then tied our emulation to our onsite network equipment, allowing us to test software in the intended deployed environment.

Third, we first ran our EXata environment on a mobile health application. The results were outstanding and the team was able to identify with precision where the software was failing or having integration issues. This knowledge demonstrated software behavior to our clients before it was shared with the development team. This allowed developers to begin mitigating problems while the testing was still occurring, which led to a faster feedback loop. For the first time in Military Health System history, software was being tested within the operational environmental situation and configuration as it exists in the field.